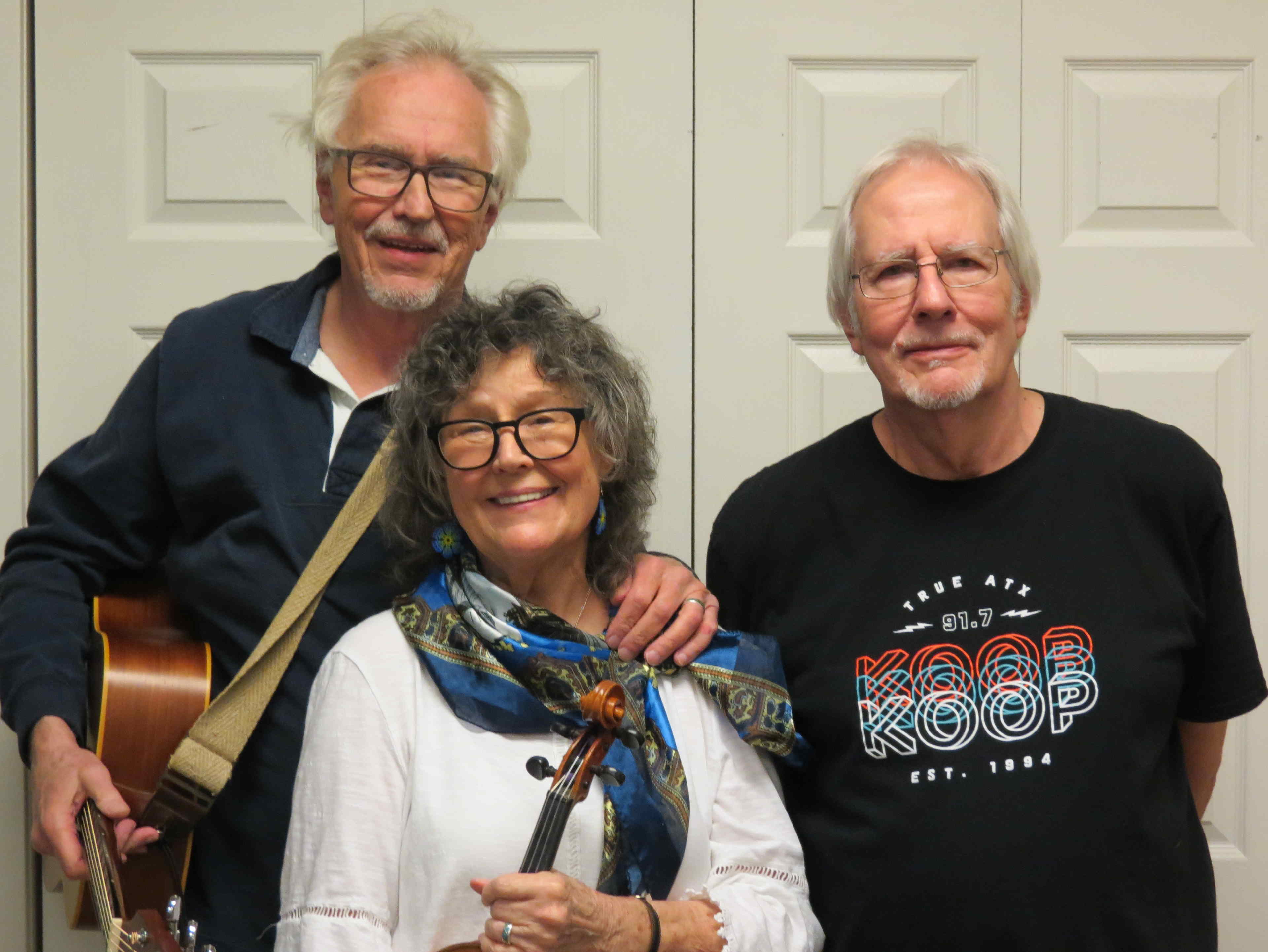 Thorne Dreyer's guests are Cleve and Sweet Mary Hattersley of the legendary Austin band, Greezy Wheels, members of the Austin Music Hall of Fame. Cleve and Sweet Mary perform, we play some music from their new cd, "Ain't Quite Like That," and we talk about Cleve's new book, Life is a Butt Dial -- and about their upcoming Merry Kinksters Tour with Kinky Friedman.
Founded in the early '70s, Greezy Wheels is one of Austin's most iconic bands. Greezy played some of the most important shows and events in Austin music history, including the breakout shows for Willie Nelson and Bruce Springsteen at the Armadillo World Headquarters. Cleve Hattersley was in the Haight Ashbury in the '60s, worked legendary clubs in Greenwich Village and for Bill Graham at the Fillmore East, and ran both the Lone Star Café and the Blue Note Jazz Club in New York. A longtime associate of Kinky Friedman, he managed two of Kinky's political campaigns and traveled the world with the Kinkster.
Above: From left: Cleve & Sweet Mary Hattersley and Rag Radio's Thorne Dreyer. October 18, 2019, at the KOOP studios i Austin. Photo by Roger Baker / Rag Radio.
Rag Radio is produced in the studios of KOOP 91.7-FM, an all-volunteer, cooperatively-run, solar powered community radio station in Austin, Texas, in association with The Rag Blog and the New Journalism Project, a Texas 501(c)(3) nonprofit. It is streamed live on the Internet at KOOP.org and Radio Free America. The host and producer of Rag Radio, Thorne Dreyer, is a prominent Austin-based activist and writer who was a pioneer of the ’60s underground press movement. The show’s engineer and co-producer is Tracey Schulz and the staff photographer is Roger Baker; Suzy Shelor is Rag Radio associate; Alice Embree is guest host; Glenn Smith and Roy Casagranda are our political analysts, and Evan Hearn is the Rag Radio apprentice. The syndicated show is broadcast (and streamed) live Fridays, 2-3 p.m. Central) on KOOP, and is later rebroadcast and streamed on WFTE-FM in Mt. Cobb and Scranton, PA., on Houston Pacifica's KPFT HD-3 90.1, by KKRN, 88.5-FM in Round Mountain,  CA, and at WALHRadio.com in Wilmington, OH -- and as a featured podcast at Veterans Today. Learn more about Rag Radio here.
Running time: 56:32
Contact:  ragradio@koop.org.